On the 80th anniversary of Operation Chariot Mark Rogers (1963-70) tells the story of one of the brave men involved in the raid on St Nazaire, Able Seaman Albert Richard Carver Stephens P/JX131369. 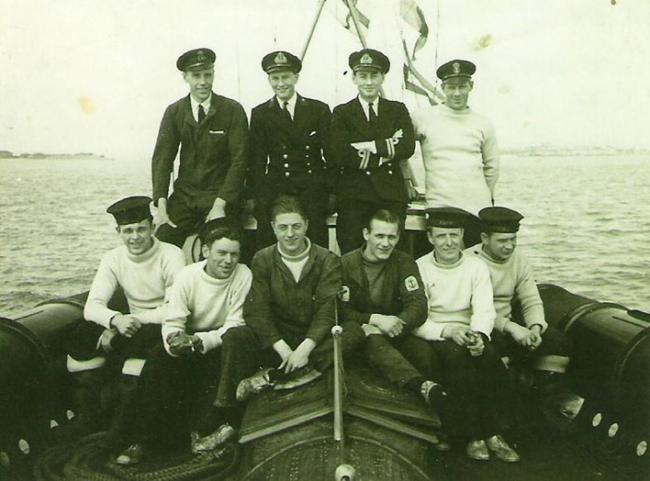 Albert Richard Carver Stephens was the only son of Albert and Sarah Stephens of Himbleton, Worcestershire. His mother ran the post office in the village and paid for him to attend the Worcester Royal Grammar School where he studied until the age of 16. His father had died during the Spanish Flu epidemic in 1918.

Dick’s life was the Navy, the only thing he ever wanted to do, and he joined up as soon as he left school in 1927. After training on HMS Ganges, he served aboard HMS Nelson for three years before transferring to HMS Dainty in the China Station and visiting the West Indies in HMS Norfolk.

Harry Rogers, from Himbleton, who knew Dick well, told me that he was quite fearless, and on his infrequent visits to the village on leave, kept the locals entertained with his antics, including shining up the drainpipe of Himbleton Manor to visit the maids! He was a good boxer, winning trophies and medals in the Navy, and knocking out Johnny Bate, a local professional. An evocative photograph of Dick (back row, second from left) on HMS Dainty

By 1940 he was serving aboard MTB 102 commanded by Commander Christopher Dreyer, who wrote to me in 1998, “Stephens was our air gunner and our most excellent cook, producing marvellous meals on the little Primus stove, and a dearly loved character.”

In MTB 102’s 70th anniversary booklet Dreyer recounted further memories of Dick. “In a bigger ship I suppose he would have been the despair of his divisional officer, since he was undeniably rather scruffy, usually smoking when he shouldn’t have been, always returned from leave in a huge friendly aroma of beer, and it was difficult to get him out of his overall suit and into proper uniform – but whatever guns we had were gleaming.”

The month of May saw their small boat playing an important role during the evacuation of the BEF from Dunkirk. They made 12 or 13 trips across the Channel ferrying VIPs back and forth, including bringing home General Alexander, the army commander. After the destroyer HMS Keith was sunk, they took on board Admiral Wake-Walker, the man in charge of the embarkation of troops from the beaches. 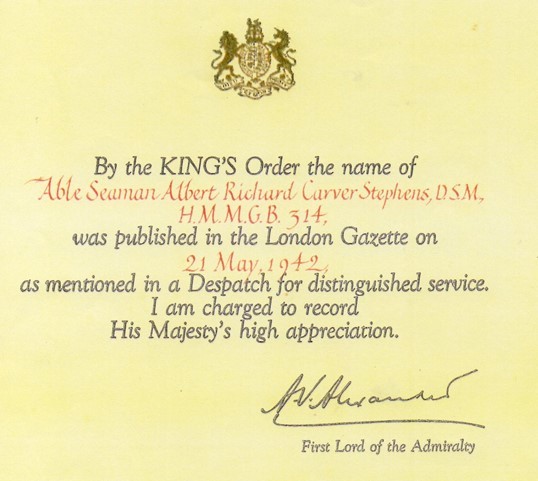 For his determination and bravery during this operation, Dick was awarded the Distinguish Service Medal, with the citation reading, ‘For good services in the withdrawal of the Allied Armies from the beaches of Dunkirk.’

Later in June he was on board MTB 102 when they took off the crews of two ships that were deliberately sunk to block Dieppe Harbour.

In 1942, as Operation Chariot was being planned, MGB 314 was designated to be the headquarters vessel. According to those who knew him, Dick was quite fearless, therefore it is not surprising that he was chosen to take part in one of the most audacious raids of the Second World War.

One dilapidated destroyer, surrounded by a cluster of small naval craft, left Falmouth in March 1942, intent on sailing down the Channel, around Cape Finistere and entering the Loire estuary. There they were to destroy the lock gates at St Nazaire, thus preventing the Nazis from using the only dry dock in France big enough to repair battleships such as the Tirpitz.

In retrospect, the attack on St Nazaire was an extraordinary gamble, which was to succeed but cost the lives of many brave men, including Dick. 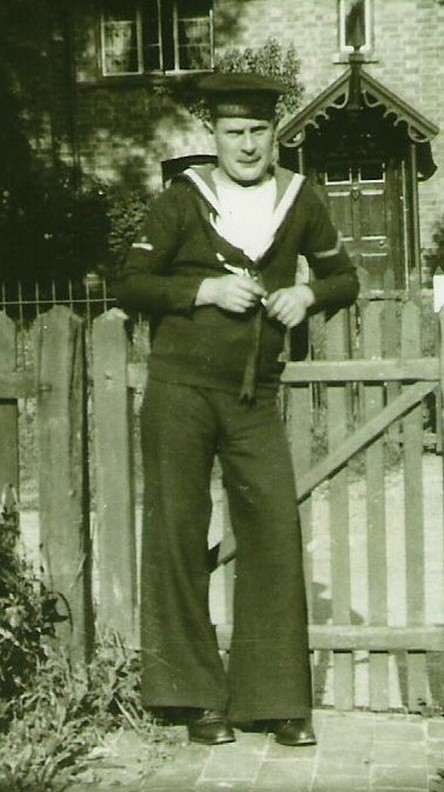 Dick Stephens at the gate to his mother’s Post Office, a spot that can still be found today

He was one of the crew of MotorGun Boat 314 which was to lead the raid. On board was the man in charge of the operation, Cdr Ryder. The tiny force managed to bluff its way past the unsuspecting Germans, and when they were finally recognised, it was too late for them to prevent the destroyer HMS Campbeltown from ramming the dock gates. Fierce fighting ensued as Commandos were put ashore to wreak devastation on the harbour facilities and after a desperate struggle those boats that remained afloat retired.

As the operation drew to a close, MGB 314 was one of the fortunate few of the little ships able to make it back out to sea. Lt Cdr Peter Scott takes up the story: “Just when she was beginning to get out of the searchlights, she came upon an armed trawler, which opened an uncomfortable heavy, but fortunately not very accurate fire which did no serious damage.

“Splinters from one of the last shell to be fired by the heavy batteries, however, caused further casualties on board and killed Able Seaman Savage the layer of the pom-pom and Able Seaman ARC Stephens, the loading number, who had served their gun with such spirit throughout the whole action.” (The Battle Of The Narrow Seas by Lt Cdr Peter Scott)

Peter Ellingham also came across Dick and wrote to me: “I do recall going forward on our way out of St Nazaire, seeing Dick sitting quietly on the deck with a shattered leg, and although he had a tourniquet put on his leg, he was losing a lot of blood and that is what killed Dick. I spoke to him and gave him a ciggie as he was a heavy smoker, and we talked of the raid.”

MGB 314 rendezvoused with HMS Atherstone, one of the destroyers detailed to assist in the withdrawal, and Dick was transferred to their sick bay where he died.

MGB 314 had a crew of three officers and 17 men: Cdr Ryder had taken two more officers and a signalman with him, so that there had been on board altogether 24 naval personnel. Among them were awarded two Victoria Crosses, three DSCs and four DSMs. 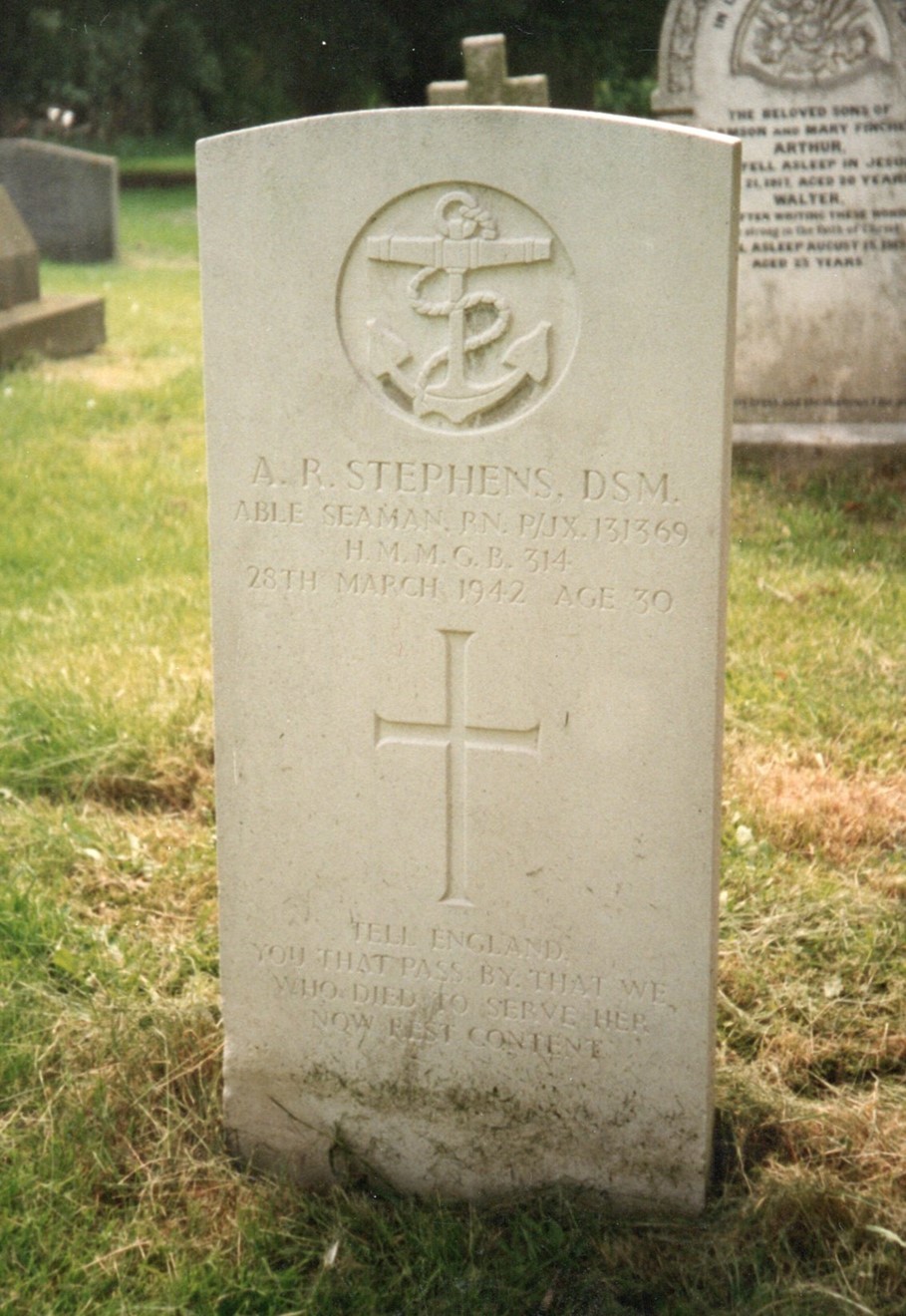 Dick Stephens’ body was returned to his home village, where Harry Rogers told me the church was packed for the funeral service. He was laid to rest in the churchyard, next to his father, a short distance from where the photograph was taken at the gate to his mother’s post office.

Stephens was Mentioned in Despatches with his citation reading ‘For great skill and dauntless devotion to duty as second coxswain of a Motor Gun Boat. He was mortally wounded while helping at the pom-pom.’

In 1997, I was researching the School War Memorial. I was able to track down the nephew of Dick Stephens, Dick McCann, who was probably named after his late uncle. He had inherited all of Dick’s effects, and when I interviewed him at his home he kindly loaned me various photos and other items to help complete the entry in my book. A final twist to this fascinating tale is that MTB 102, on which Dick won his DSM, is still afloat. Having survived Dunkirk and the rest of the war, she passed through many hands before being taken into trust. She is thought to be the only surviving Naval vessel to have served at Dunkirk.

Let Frank Smith, the ‘trainer’ on the pom-pom, have the final say on Dick. In a letter to me in 1998 he wrote: “He was a fun man, always skylarking and making jokes, the sort of person you could rely on, and the type you want as a shipmate.”

Our thanks to Mark Rogers for kindly sharing his work with the School Community.